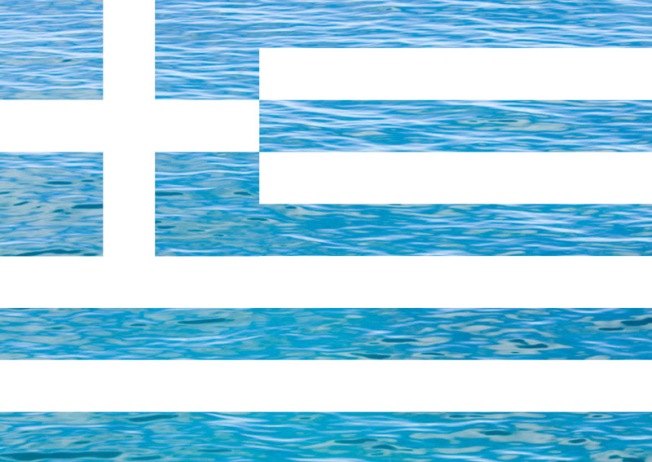 Peter Economides (http://petereconomides.com) posted this image this morning under the heading, “Just because it feels like summer today,” perfectly capturing our joy in the day, the warm breeze, and the glorious sea. Economides got our attention with this talk (https://www.youtube.com/watch?v=Chhn5oEmITs) about rebranding Greece which resonated with many people thinking about ways to respond to the current crisis .

In the last week, we’ve gone from highs of around 70 to highs of around 80, and the lingering clouds have been banished. Wednesday is May Day, a holiday, and Sunday is Pascha, and the mood here is Opa!

In addition, while we were sitting on the balcony getting our eyes open this morning, Susan spotted a pod of dolphins swimming west in the Gulf. There were 6 of them, beautiful to watch, and we took it as a sure sign of good times ahead.   Good-bye socks, farewell jeans, hello shorts, yiasou sandals!

We ordered tea, OJ, plain yogurt, and Mani pitas.  Those are the Mani pitas on the right.  They are simply fried dough and they are outrageous.  The two little cups of honey and the cup of marmalade are for spooning over the pitas.  Which I did — both honey and marmalade.  The orange juice had just been squeezed from local oranges. 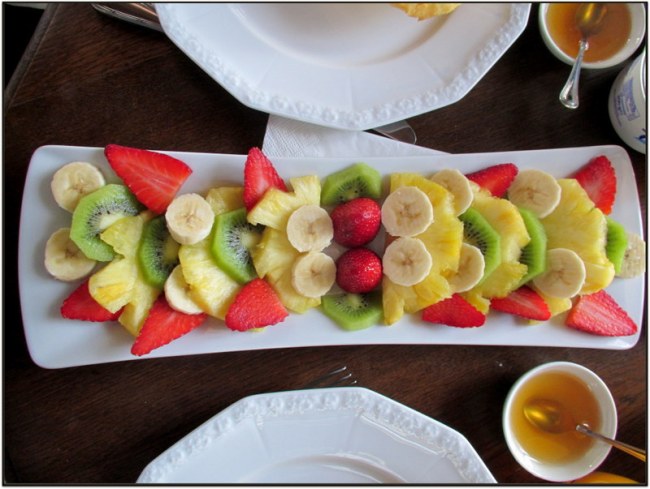 Oh, and we asked for fruit with our yogurt.

We skipped lunches, spend the 3 days walking around, and I still gained a pound.  Worth it.

The Mani is the southernmost peninsula in the southernmost part of Greece.  It’s a stark, barren landscape of rock, sea, and sky and it is renowned throughout Greece for its harsh geography and fierce  inhabitants.  It’s also the home of Susan’s forebears, so we have a special affinity for the place.  We particularly like to visit in the early Spring when wildflowers pop from between the rocks and the gray, ashen hills are transformed into a vista one might expect to see in Ireland.  We drove down for a visit at the end of March, and put up at a sweet B&B in Areopoli.

Areopoli is the unofficial capital of the Mani.  Its name, city of Ares (the  god of war), refers to the city’s place as the starting point of the war of independence. On March 17, 1821, independence was declared in the square of the church of the Archangels in the center of Areopoli, and the Maniots immediately marched on the Ottoman garrison in Kalamata.  That garrison fell on March 23, and other parts of Greece joined the fight on March 25, now celebrated as Independence Day.  In the photo below, the view is down the main street of Areopoli, to the bell tower of the church of the Archangels. 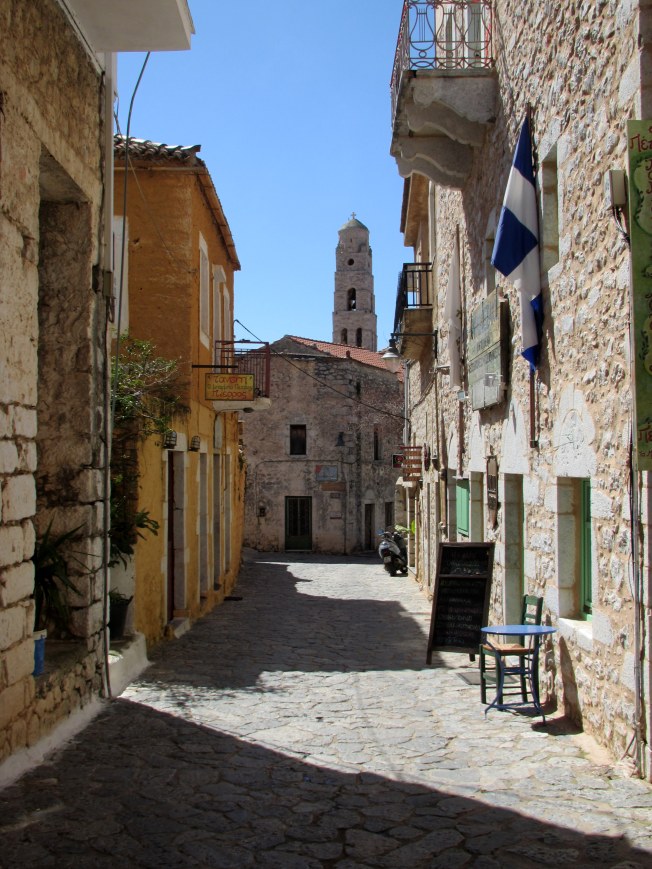 Looking back from beside the church to a peak called Arkoutholatsa (815 meters), which guards the city on the east:

That night the full moon rose over that same peak:

The next morning we drove north to visit the villages of Stoupa and Kardamyli, and buy some olive oil, sea salt, mountain tea, and other essentials that are just better in the Mani.  We stopped along the road to grab a couple of snaps of the wildflowers: 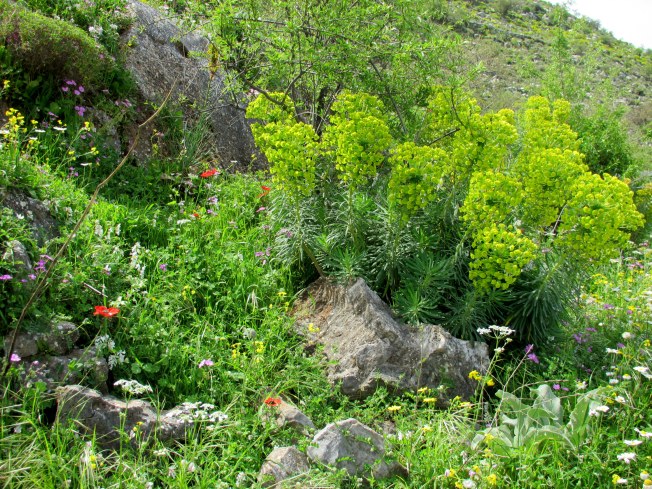 The following morning, we drove south from Areopoli, heading down the eastern side of the peninsula.  Villages in the Mani tend to be sited either deep in valleys or up on ridges or hills.  I suspect the choice had to do with the perception of relative safety at the time the village was founded.   I believe this one is called Olimbies. 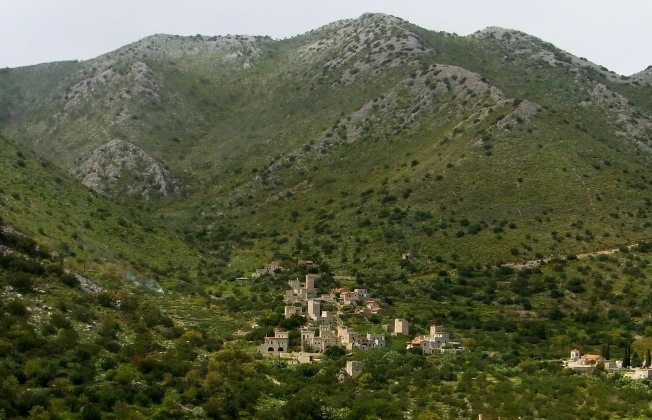 This one is Spira, with the Gulf of Laconia beyond.

Those 2 photos were taken from the village of Dimaristika which was once the center for Sue’s family.  This is the family’s war tower in Dimaristika: 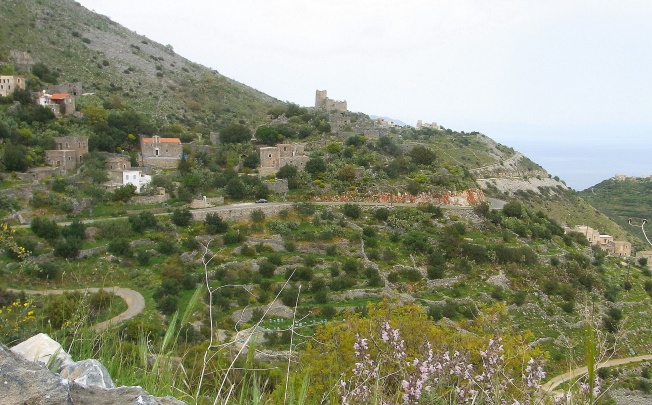 We spent some time walking around Lagia, a pretty village where Sue’s great uncle went to school.  This is a nice example of a war tower, probably an early restoration: 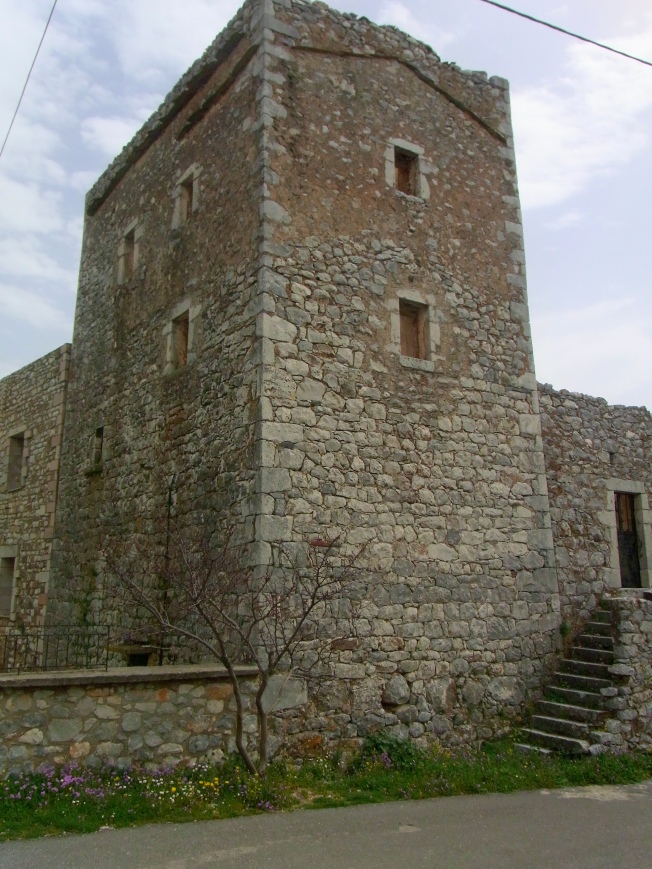 The archetypal Mani house, looks to be another older restoration:

There was a large house next to the central church, which we took to be the rectory.  The next 3 photos were taken around that house. 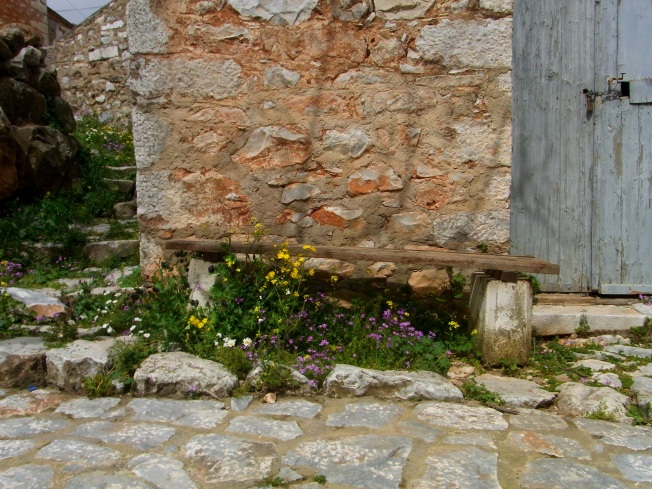 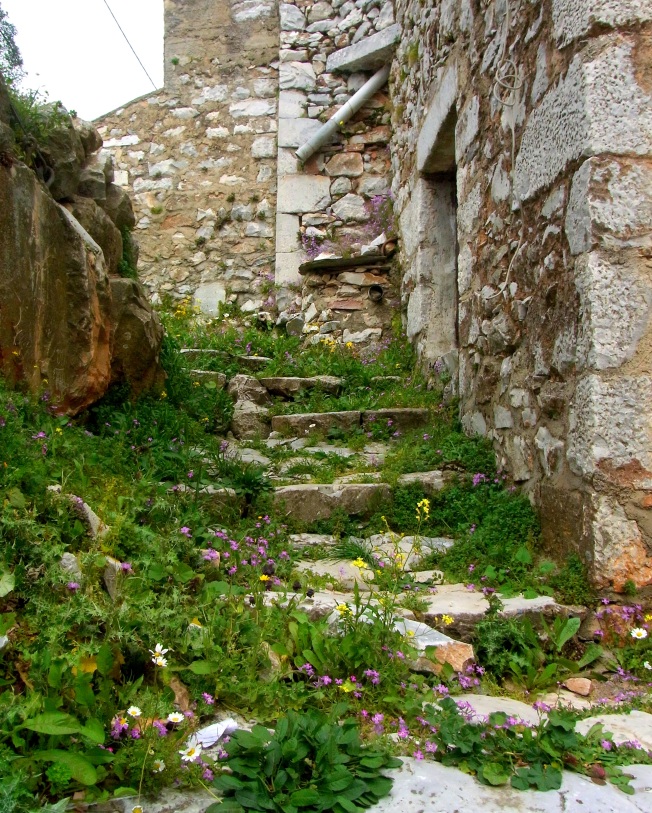 This is Porto Kayio, taken from the Venetian for “Bay of Quails”.  In the before times, quail were present in great numbers and they were netted and packed in salt for export.  It was here that we crossed the Mani peninsula to the western side and turned north for Areopoli.

This is a church called Episkopi (12th century),  with the Tigani peninsula jutting into the Gulf of Messinia in the background.  We used a nearly identical photo for our Christmas card a few years back.

A closer look at Tigani.  A Venetian or Frankish fortress was built on the raised portion at the end, guarded by 100 ft cliffs.  Foundations are all that’s left.

While we were driving around looking for the road to Tigani, I grabbed this photo of Susan between two tower houses.

A bit further up the coast, we stopped at the church of St. Barbara (1150 AD), near Erimos.  We’ve also used a photo – different angle – of this church for our Christmas card.

This is an obviously ruined, presumably older church, in front of St. Barbara’s.  You can just make out some fresoes in the vault of the apse.  This is not a unique case in the Mani.

Arriving back at the B&B, we took a walk in the fading daylight and I grabbed this snap of Omales, the  little settlement about a half-mile outside of Areopoli where we stayed.

A lane in the Mani: 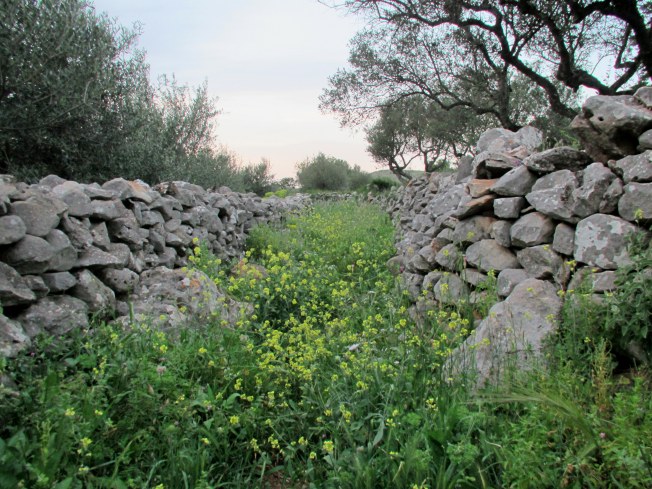 Peeking into an olive groove in the gloaming: 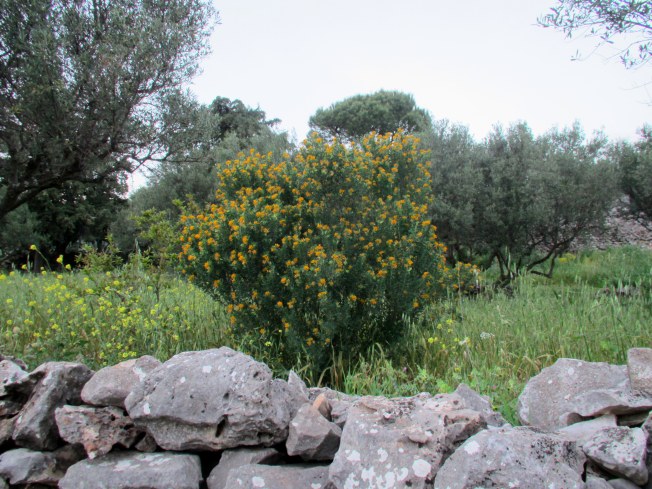 The light’s about gone but the tree’s still in bud, and the wildflowers run riot:

We call this type of cactus a Mani Fig because the Maniots peel and eat the prickly fruit they bear.  This photo doesn’t give an adequate idea of the scale of these plants but standing along side them, they tower over me. 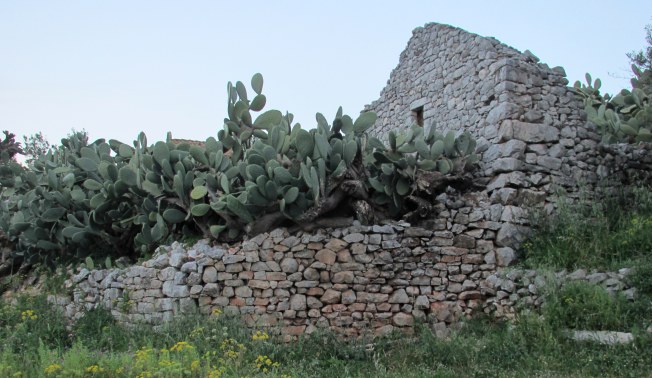 From the patio of our room I grabbed this shot of the ruined house beyond.  The houses in Omales are slowly being restored.

As I was taking that last photo this little guy flew out of the house and perched on that ruined wall attached to the center of the house.  It’s known as a Little Owl but we call it a Mani Owl because it’s the only place we’ve seen it.  And we’ve seen or heard it each time we’ve stayed at this B&B.  They’re only 9 – 11 inches tall and are indigenous to southern Europe and Asia.  It appears on all Euro coins minted in Greece. 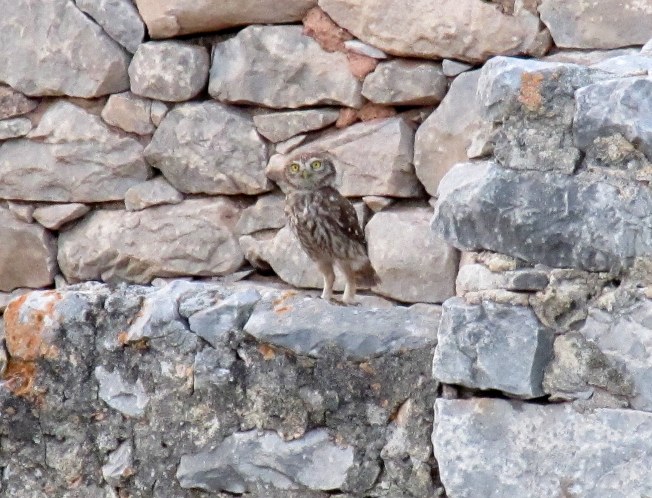