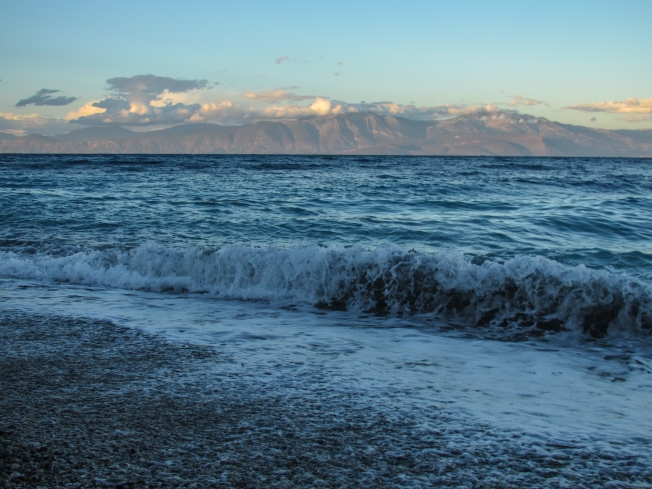 Good winter, Sikya.  It’s the standard leave-taking in Greece at summer’s end.  As always, leaving is bittersweet; we’re anxious to see our family and friends in the States but sorry to leave our friends and family in Greece.  The weather this September was spectacular.  From the time we got back to Greece on 26 August until the morning we left (October 3), it was mild and sunny, warm enough for a swim, cool enough to lie on the beach without suffering.  Meals on the balcony have been a delight, and there’s been a very pleasant northwest breeze almost everyday.

The Sikya fleet maintained at least a shadow presence until the last day — a first for us.  And anglers were particularly active this September — both from the beach and in boats in the cove the activity seemed frenetic.  Our peeks at the catch buckets revealed some very nice panfish, a sea-change from the little gavros we usually see reeled ashore.  Adonis was his usual steady self, working out ceaselessly on the beach and in the sea but he, too, is different this year.  With his hair cropped short, and his beard grown out, he’s scarcely recognizable.  Susan said, “It’s like he’s had a head transplant.  I had to look at his body to make sure it was him.” Perhaps he’d take some consolation in that.  And the comedy show we refer to as The Mayor also saw a new act.  When we returned from our trip to Thessaloniki in mid September, the mayor’s boat, know to us as The Scow, was beached in the crook of the cove.  We thought perhaps the mayor had made a desperate miscalculation in attempting to save a few euros on winter docking fees.  Surely the surf would pound that part of the cove all the way to the seawall during winter storms.  But, indeed, The Scow was floating again a couple of days later, albeit a bit lower in the water.  And finally, during the last weekend, we saw a fishing boat giving The Scow a brisk tow in the general direction of the Xylokastro marina.  The mayor’s beach outpost, which grew to gypsy camp splendor this year, took on a decidedly neglected aspect, and the mayor could be spied sitting among the ruins staring disconsolately out to the spot in the cove where The Scow had formerly been moored.

The splendid, dreamy, ideal weather appeared to be coming to an end, however;  the rains had begun.  In the wee hours of 1 October we got a downpour which I estimated at an inch — the most rainfall we’ve witnessed in Greece.  By dawn, however, the sky was cobalt once again and a line of clouds drifted below the top of Mt. Elikonas, across the Gulf.  And the morning we left, in the dark of 4-blinking-30 AM, in a rented Suzuki SX4, I had my first opportunity in 6 months to drive in the rain on our way to the airport.

The last full moon of this year’s trip was while we were visiting Thessaloniki.  It was wonderful seeing it rise over the city but we missed sitting on the beach in Sikya, peering to the east every few seconds, until suddenly, finally, it’s there: larger and closer than we’d expected.

It feels like it’s time to leave.  Our apartment complex is virtually empty, and we’ve wished a good winter to many of our neighbors.  The plateia, so busy on summer evenings, saw only a few kids each night the last 4 weeks, and recently dwindled to none.  The silence, so fervently longed-for, now seems lonely.  We laid in bed this morning, waiting for the 3:00 am alarm, listening to the surf bursting on the beach (a rare treat), thinking of the changing seasons, of time passing irredeemably.  Time to get up and go.  Good winter, Sikia.

I can’t leave the subject of Santorini without mentioning the sunset.  People come from all over the globe to see it, couples spend a fortune to be married with a Santorini sunset backdrop, tourists stand shoulder-to-shoulder in Oia to view it from that picturesque point, and, at every good sunset of the summer, multitudes come from all parts of the island, virtually lining every open space on Santorini’s cliff-edge to see (and photograph) the glorious, ever-altering spectrum washed across the seascape.  It must be one of the most photographed sunsets on the globe.  I’ve certainly never experienced anything like it.  Here are a few of my photos — I wish they were better.

That’s the southern-most point of Therasia out there, with Nea Kameni, the active part of the volcano, in the middle of the caldera.

A tasting at the Sigalas winery

Since it was the wine of Santorini that caused us to revisit the island, it seems only right that we give it its own blog post. Santorini wine is remarkable because the vines are cultivated in conditions that more or less preclude the growth of vegetative matter of any sort.  The vineyards are hills and slopes of volcanic pumice.  Any rain that might fall would drain through this stuff in about a second.  In any event, though, it doesn’t rain. One winery rep this summer told us that the last rain had been in May and the next one would be in November.  And, on top on the annual summer drought, there’s the matter of the sun.  It’s a merciless, desiccating, searing physical force that feels  like a giant broiler overhead.

One might add wind to this recipe for desertification but in the case of Santorini’s vineyards, light and moderate winds are a blessing because they carry moisture from the sea up the slopes to the vines.  And Santorini’s winemakers long ago developed a unique method of capturing that moisture.  Unlike vineyards elsewhere that grow grape vines supported on trellises, here the vines are trained in a circle, one branch on top of another, until a “basket” of living vine is created.  The grapes grow inside this basket, providing protection from strong winds, and the leaves overhead shade the grapes and help collect moisture.

A vineyard near the Argyros winery.  Not sure if it belongs to Argyros.

A single vine, about a month before harvest in mid-August.  A few grape clusters are visible on the left.

Here, you can see a few rows of the vine forming the base of the “basket.”

And, as it turns out, the arid climate and the soilless vineyards also provide some benefits to the vines.  First, the phylloxera virus that ravaged european vineyards and required they all be replanted with vines grafted to American rootstock never affected Santorini’s vines because the virus cannot survive in the pumice fields.  As a result, some of the vines on this island are thought to be 500 years old — the oldest in the world. Second, the grapes can be left laying on the ground without worry about rot or mildew.

A wine-aging cave dug into the pumice at the Art Space winery.

The king grape of Santorini is called Assyrtiko, and in the island’s volcanic soil it produces a white wine of stunning power and elegance.  Sharp minerality, citrus, and nose of the island’s wild herbs  make it not only ideal for sipping on warm evenings but also a marvelous partner to lamb and grilled seafood.  Other parts of Greece produce some assyrtiko but the examples from Santorini are singular and sensational.   Even more intriguing, these wines can be aged 5 years and more, although I’ve never been able to leave a bottle unopened for more than 2 years. 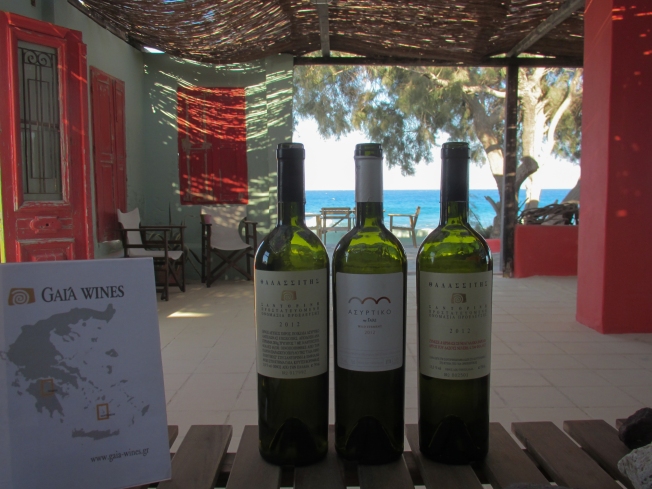 The tasting room at the Gaia winery.  Spectacular wine, too.