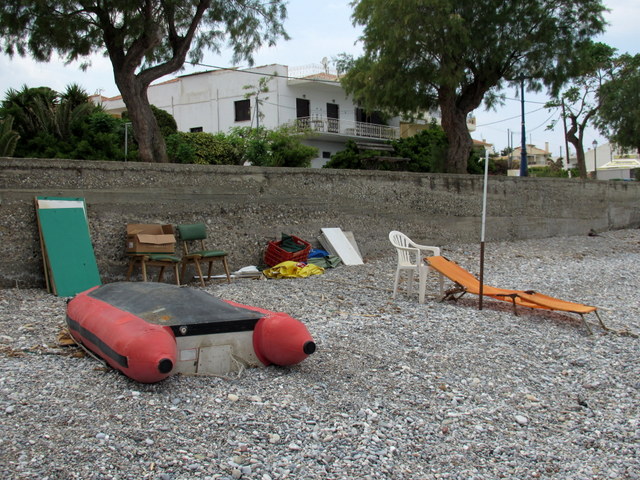 I assume every village/town has its characters; Sikya certainly has a couple. The man I’m thinking about just now we christened “The Mayor” in our earliest days here. In fact, I don’t know if Sikya has a mayor — it may be too small — but if it does this guy is no more the real mayor than the real Archbishop of Canterbury.

The Mayor came to our attention because of his remarkable persistence and consistency. Every summer day without fail he sits in his camp on the beach, from dawn to dusk, staring out at his boat moored just offshore. Most of the time he sits alone; occasionally one or two of his cronies will sit with him. I’ve never seen him in the water. As far as I can tell, he can’t swim. On the odd day when the mood strikes him, he rows himself out to the boat in his half-inflated inflatable, which I refer to as “The Dingy Dinghy.” On these days, he most often sits on the boat, which is tied to its mooring buoy. Sometimes, he plays the radio. Sometimes, he fishes. After a few hours, he rows himself back to shore and resumes his watch on the beach. On great occasions, he fires up the motor, lets slip the mooring line, and cruises out a few hundred yards before cutting power and drifting in what is usually glassine water. On a few most remarkable days, he has roared out of the cove and out of sight, invariably causing me to wonder what wild fantasies must be running through his mind.

As you may have noticed in the photo, the mayor’s camp has a certain aesthetic. This same aesthetic runs through everything I know about the man– and I’ve seen his car and I’ve seen his scooter. The Dingy Dinghy is emblazoned with the legend (in English), “Tender to ‘Old Blue.’” One year we were amazed when his boat re-emerged from its winter shelter, its outboard motor having been freshly painted, with a brush. The next year, we were again struck when the boat itself (which I call “The Scow”) appeared with a fresh paint job, also brush-applied. Most recently, the torn canvas canopy was replaced with a snappy blue tarp.

This year, a new inflatable has appeared. This one is moored offshore, perhaps in the spot where The Scow has been secured. If it belongs to the mayor, it is unusual in that, 1) it holds air, and 2) it has a motor. My summer will not be complete until I see if this new addition to the Sikya flotilla belongs to the mayor and, if it does, how he incorporates it into his fleet. Does the new inflatable replace the Scow? Will he row out to the new inflatable and then motor over to the Scow? Will he visit one for awhile and then the other? Will he visit one on odd days and the other on even?

As far as I can tell, the mayor owns nothing that hasn’t been salvaged — including the car and scooter. If the new inflatable is his, it must have been a red-letter day when it came floating down the Gulf. This business of making do and living cheap is all very Greek and endearing, even if it is a little extreme in this case. My hesitance arises in the matter of personal hygiene. When we were overseeing the last month of the construction of our apartment, Andrew and I spent the siesta part of the day out on the beach. The mayor was there every day too, of course. What became alarming eventually was that he looked the same everyday — exactly the same. Not just the Goldwater glasses, the salt-and-pepper hair, the shipwreck tan but also, I’m sorry to say, the shorts. The mayor’s uniform in August consists of shorts and sandals. The same outfit I and most of the local men affect. The big difference is that while I and the other male residents of the village change our shorts, the mayor seemed to have found it more efficient to just wear the same pair all day, every day. We stayed well clear of the camp that summer.

I am happy to report that a box of shorts must have washed ashore since that first year as ever since then the mayor has appeared at irregular intervals in different shorts. I can’t say they look freshly laundered but they are at least different. As with the Scow’s renovation, this too seems to be a work in progress.