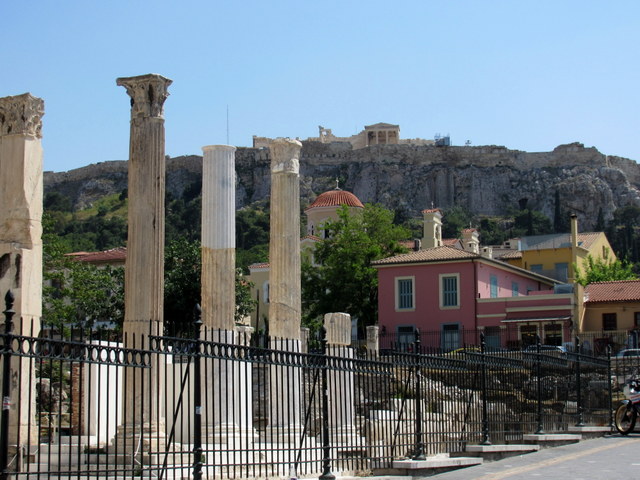 We went into Athens on Thursday to conduct a little bank business but we also had time to stop by our favorite bookstore, visit the Poet Sandalmaker for a new belt, have lunch at our can’t-miss kebab taverna, and chill at a hidden cafe in one the busiest parts of the city.

After sleepy Sikya (pop. 231), Athens (pop. 3,000,000) is a punch in the nose. Loud, crowded, dirty, graffiti-vandalized, and swarming with illegal immigrants selling bootlegs and knockoffs, Athens is a city that gives no quarter. It takes awhile to begin seeing beyond the affront to the senses but once that happens and the layers start peeling back, Athens is an opera. The whole range of human emotions has been carved into this city and the scars are now more than 2,500 years deep. You can walk where Socrates walked. You can visit the hillside where people first voted on the laws that governed them. You can stand on the rock where St. Paul defended himself against charges of sedition for preaching Christianity. And you can touch the flagpole from which the Nazis raised their flag over the Acropolis.

The Acropolis dominates the center city. Leaving Monistiraki Square, we see the the pillars of the Library of Hadrian in the foreground, with the Acropolis towering above. The structure we can see on the Acropolis is the Erechtheion. This temple marks the spot where Athena and Poseidon battled for patronage of the city. Poseidon struck the rock with his trident and a salt water spring erupted from the stone. Athena struck the rock with her staff, and an olive tree grew. The city was awarded to Athena, and this temple protected both the spring of Poseidon and Athena’s olive tree.

2 thoughts on “A Trip to Athens”