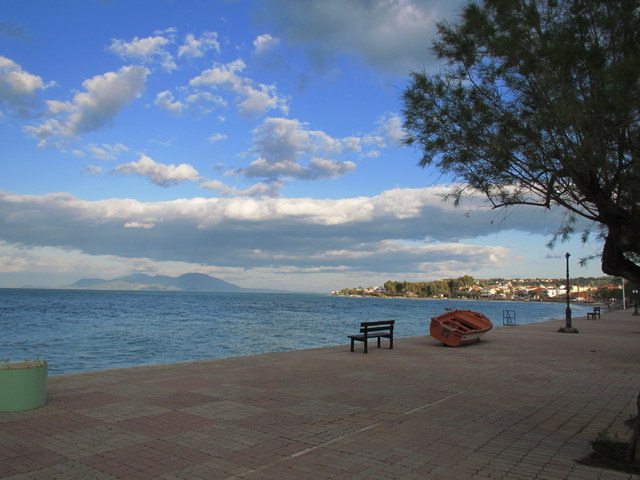 It was a windy day in Sikya, with the west wind blowing straight down the Gulf at 8 Beaufort. What’s a Beaufort, you say? The Beaufort scale was devised during the age of sail, with subjective measures for each of the twelve steps on the scale. One is dead calm, twelve has the wind whipping the tops off the waves. I’d read the term in a book but had no real understanding of the scale until I returned to the States after particularly windy ferry ride to Santorini, and looked it up in the Bowditch Practical Navigator. As an intensely nautical nation, Greece uses the Beaufort scale to measure wind speed — although the scale is a more objective today. The 9 measured just west of us was given as 77 kph, and two places in the country measured force 12 winds, given as 135 kph. The ferry captain told us that at 10 Beaufort he is permitted to use his discretion as to whether he sails — above that, he must stay in port. Our experience with the Spring and Fall winds have made it clear why the ancients, in their rowed galleys, adhered so strictly to the rather short sailing season in this part of the Med.

This pretty picture was shot just before sunset when the wind had dropped off, leaving only the high surf and the wild clouds as evidence of what had gone before.